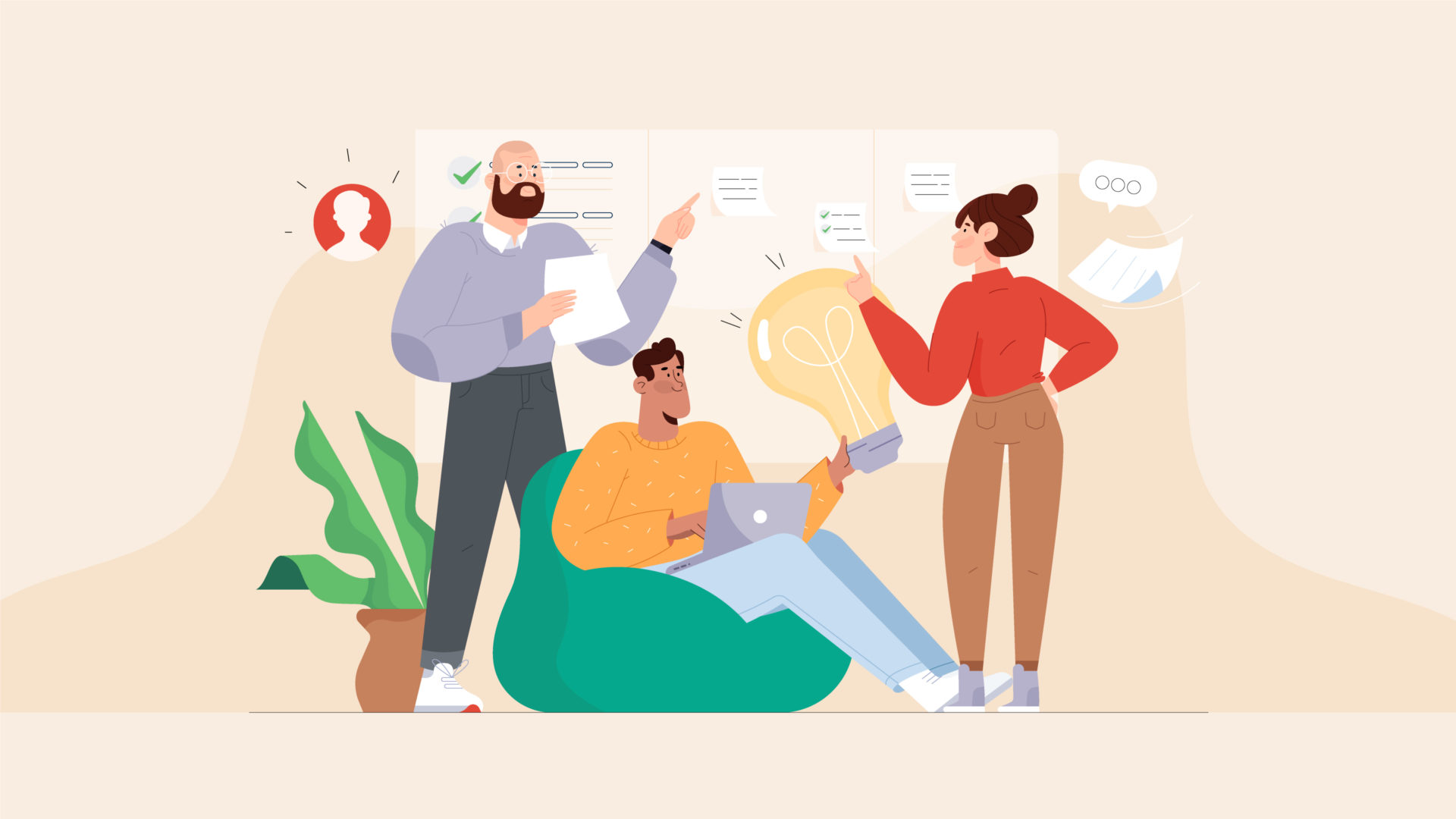 Daily huddles are an important part of keeping your Scrum team on track with their sprints. But as we’ve previously written about, they’re often seen as a waste of time. This usually means your daily huddles aren’t as effective as possible (i.e. the meetings last way too long, engineers get interrupted just as they become fully immersed in coding, and so on).

To help your team get back on track with running productive daily huddles that solve blockers and improve sprints, we cover 5 daily huddle best practices in this article.

We also look at how Scrum teams (from Zapier to GitHub) use our asynchronous meeting tool to run faster and less disruptive daily huddles in Slack (and soon MS Teams).

Note: Geekbot is free for teams of 10 or fewer. For teams over 10, Geekbot is $2.50 per user per month. Start your free trial today.

Daily huddles (also known as daily scrum meetings) are meant to be brief — 15 minutes at the longest, from start to finish. But daily huddles can quickly drag on, for several reasons, including:

At the heart of these problems is the synchronous nature of daily huddles. In-person or video meetings are infamously prone to disruptions, and often go longer than anticipated.

So to help teams (ours included) run more effective and concise daily huddles, we made Geekbot. Geekbot is an asynchronous daily huddle software that integrates with Slack (and soon MS Teams).

Here’s how it works:

1. Your team fills out their answers to the daily huddle questions (which Geekbot automatically delivers to all participants in Slack).

2. The team’s answers are shared in a Slack channel of your choosing:

3. At their convenience, team members can look through updates to see if they can be of any help or need to be aware of any issues.

Based on conversations with customers, typing the daily huddle updates and skimming each teammate’s response typically takes 5 minutes. This is much faster than in-person or video daily huddles, which are naturally more prone to time-wasting disruptions.

Note: To see how fast (and easy) it is to run daily huddles with Geekbot, sign up here.

Sometimes daily huddles go on too long because developers are trying to solve blockers in real time. While this may seem productive, the reality is that it’s detrimental to the huddle. Because if two developers are discussing a problem in real time, then the rest of the team may be stuck listening to an issue that doesn’t concern them.

When you’re running synchronous daily huddles, a facilitator has to do a good job at stepping in and reminding the developers that they need to table their problem-solving until after the meeting. (This is often much easier said than done).

But when you use Geekbot, this problem is naturally avoided. If someone is tagged to help with a blocker or if someone on your team has advice for another developer, they can respond to the update by creating a thread in Slack:

Now your developers can solve problems in real time without notifying and disrupting other team members.

3. Make Sure Only One Person Speaks at a Time

If you’re running synchronous daily huddle meetings, it’s critical that you make sure only one person speaks at a time.

If it’s a free-for-all, then your meeting is more likely to get off track. People may talk over each other, people may offer advice or criticisms when it isn’t their turn to speak, and this makes the daily huddle less effective.

To solve this, one option is to pass around a ball or a baton that signifies who’s speaking. The facilitator of the daily team huddle starts it off, and then that person, after giving their status update, will pick another person at random to pass the baton to. This keeps everyone paying attention, and less worried about what they’re going to say when it’s their turn. It’s also an easy way to remind people to respectfully be quiet when it’s not their turn to speak.

Due to the asynchronous nature of Geekbot, you don’t have to worry about ensuring only one person speaks at a time — this problem is naturally avoided, which makes the daily huddle more effective.

Also, as we mentioned in the last section, teammates can always create a thread within Slack to conversate with someone about an update (without disrupting others and derailing the meeting).

For some teams, it can be challenging to get developers to show up to the daily huddle. (This issue is even more dramatic when you’re talking about remote teams.)

One way to encourage attendance is via incentives and deterrents. Here are just some ideas from Mountain Goat Software’s blog post about the topic…

Note: For a much larger list of incentives and deterrents, see this article.

Keep in mind, these incentives and deterrents should always be productive and friendly in nature. The goal is to gamify the otherwise mundane experience of worrying about attendance.

But people who don’t show up to the daily huddle aren’t always doing it with purposeful intention. It could’ve slipped their mind, because they got so busy or deep in focus on whatever task they’re working on.

This is a problem that can be minimized when using Geekbot to run asynchronous stand-up meetings. Geekbot reaches out to folks in Slack to complete their standup, but if they’re in the middle of a task or on a call, they can press snooze.

Geekbot will circle back with them and remind them a little later that they still need to fill out their standup. Now your developer can complete the standup when it’s more convenient for them, which will increase your team’s participation rate.

Optionally, you can also either set up manual reminders or smart reminders.

A manual reminder is when Geekbot follows up with your developers at a predetermined interval of time, such as after thirty minutes, an hour, or so on.

If you opt in for smart reminders, Geekbot will automatically keep track of when each developer is most likely to fill out their daily huddle, and follow up accordingly. For example, if your developer Henri always snoozes Geekbot at 9:00 am, but then fills out his daily huddle right before lunch at 11:30 am, then Geekbot will take note of that and follow up with him around that time going forward.

5. Schedule the Daily Huddle Near the Start of the Day

While everyone’s situation is different, for the majority of teams, the daily huddle works best when it’s done at the start of the day. It gives developers more time to follow up about any blockers that arose. In addition, when someone shares a morning update on what they’ll be working on, it gives an opportunity for teammates to step in and provide help (i.e. “I actually worked on a very similar problem recently, and can help you shorten the time it takes to complete it”).

This best practice primarily applies to teams who are all in the same time zone, and if you manage remote workers who are in different parts of the world, then morning huddles may be unrealistic.

For example, if you have one developer in London, and another in Los Angeles, then they’re separated by 8 hours. As one person is finishing their workday, the other is just getting started.

Because of that, the goal of many teams who run remote daily huddles is to simply find the most convenient time possible across everyone’s time zones. But this doesn’t always work out, and a developer may be forced to get up extremely early or stay up late to attend the meeting.

To avoid developers having to hop on video calls when it doesn’t make sense, you can switch over to asynchronous daily huddles.

When you schedule a daily huddle with Geekbot you can tell Geekbot to automatically factor in everyone’s timezone.

This way, developers get notified to complete the daily huddle when it’s most convenient for them, rather than at an odd time in the day.

Geekbot is free for teams of 10 or fewer. For teams over 10, Geekbot is $2.50 per user per month. Click here to learn more and sign up.

Try Geekbot free for 30 days and join over 100,000 users who run quick, asynchronous, and minimally disruptive standups in Slack.

What Should Be in a Daily Huddle?

A daily huddle is a short meeting with a simple meeting agenda. The point is for your developers to share information, specifically what they finished yesterday, what they’re working on today, and whether they’re facing any blockers or roadblocks.