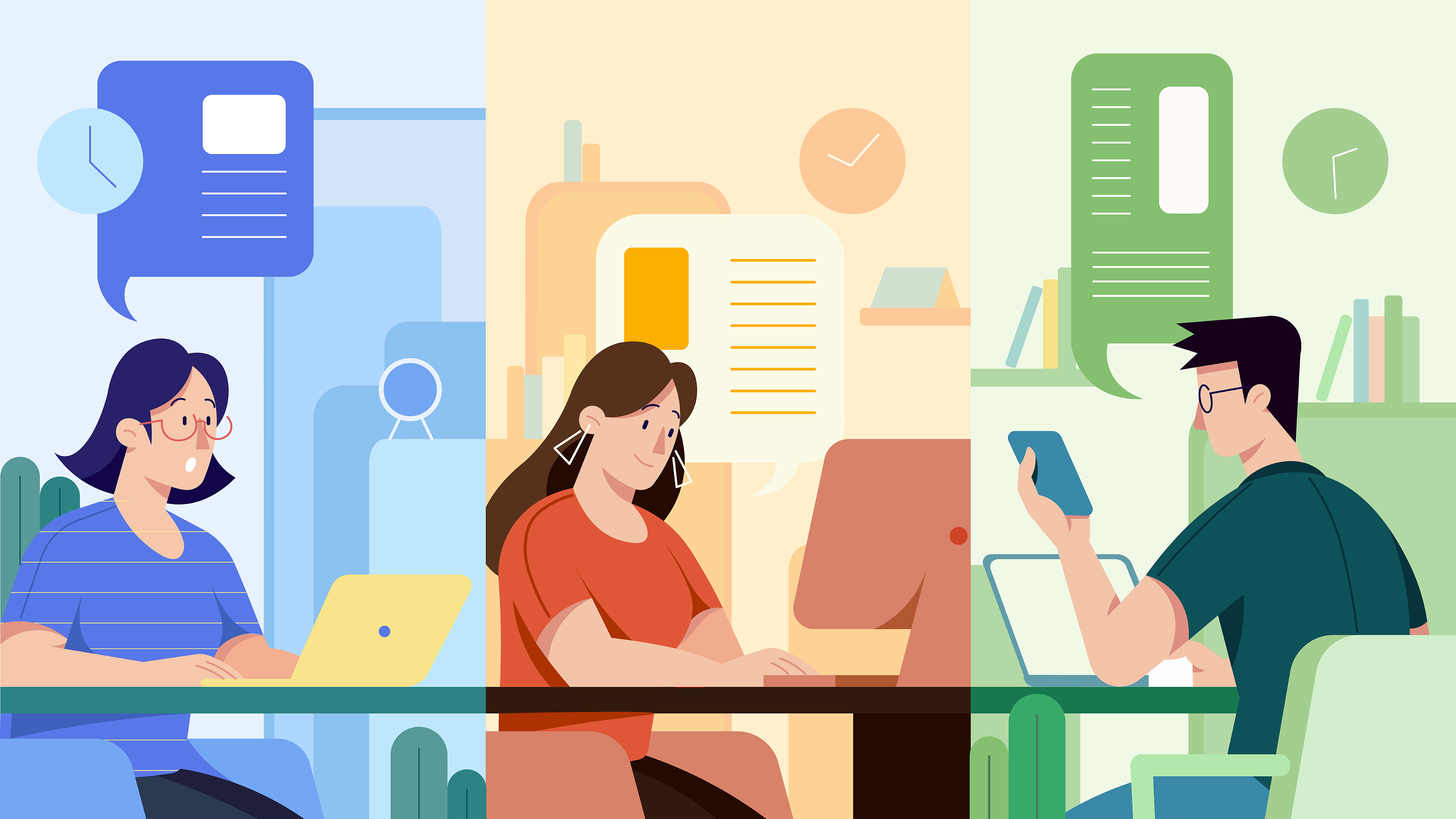 Before we built Geekbot (a tool that lets teams run asynchronous meetings in Slack) our remote 7-person team used Zoom. But the synchronous nature of video calls presented several challenges:

We realized that the answer to the obstacles we covered above was to hold asynchronous meetings, and in this post, we’ll discuss:

The Advantages of Asynchronous Meetings

We decided it was time to swap out our synchronous video calls with asynchronous meetings. In this section, we’ll describe why we came to that conclusion.

1. Asynchronous meetings are easy to schedule.

Note: Some teams try to hold asynchronous video meetings, where recorded video is uploaded into a platform, and team members can watch the videos on their own time. However, when people are forced to write out their thoughts, they’re generally more concise and to the point. Plus, consuming text is quicker than video. This is why we recommend text-based asynchronous meetings.

A meeting will always be an interruption, but there’s a significant difference between a purposeful interruption — where team members break from their workflow to partake in a meeting that will make their day easier — and an unhelpful interruption.

Asynchronous meetings work to reduce the impact of a meeting’s interruption to your workday by letting you adjust when you conduct your meeting.

For example, if you’re in a groove with a line of code or finishing up a new pricing proposal, then  you can use the asynchronous meeting software at a later, more convenient time. At Geekbot, we actually built this as a feature. At the set time, Geekbot reminds you with a Slack notification that it’s time to complete your meeting update — but if it’s not a good time, then you can hit snooze and Geekbot will follow-up at your own set pace:

3. Asynchronous meetings help keep the meeting from getting derailed or going too long.

Before we made Geekbot, we tried replacing our face-to-face synchronous video conferencing with a basic web form that we built. The idea was that team members would visit the web form and submit typed out answers to the meeting questions. We know of other teams that have tried something similar by conducting asynchronous meetings in Google Sheets.

But we quickly learned that neither our web form or free platforms like Google Docs and Google Sheets are a sufficient tool for holding productive asynchronous meetings.

First, it’s difficult to keep track of comments in tools such as Google Sheets. The whole point of asynchronous meetings is to minimize disruption and scheduling hassles while increasing communication.

But it isn’t easy or intuitive to respond to team members in these types of platforms. Team members can reply to meeting notes as comments but comments aren’t easy to see — and the notification of that comment can quickly get lost in a busy email inbox. Plus, tools like Google Sheets, Excel, and Google Docs aren’t mobile-friendly. In short, these platforms were not designed as intuitive communication tools.

Second, hosting an asynchronous meeting through these types of platforms is too passive. There is always work to do — that’s why meetings are called an interruption — and team members are likely to forget to fill out meeting notes. We experienced this first hand with our web form; we’d get so busy at times that we’d forget to make updates. This meant meetings weren’t happening regularly, leading to communication issues throughout the week.

Below, we’re going to detail how we ended up building our own solution — asynchronous meeting software that integrates with your team’s Slack account — and discuss the benefits we’ve personally experienced over the years, along with 60,000+ of our users.

How We Built Our Own Slack-Integrated Asynchronous Meeting Software

We made Geekbot to help our team overcome the obstacles of running an efficient and productive asynchronous meeting.

Here’s how it works:

First, you set the question(s) you want Geekbot to ask your team. This can be changed as needed, and the number of questions can be increased. You set a specific time for the notification to be sent out, and your team members get a ping from Geekbot, asking them to fill out the questions.

Note: Most of our users utilize Geekbot for daily standups, but Geekbot’s features aren’t exclusive to agile teams — the questions and meeting schedules are completely customizable and can be adapted to suit a variety of needs.

Team members can either give an immediate response or, if they’re mid-task, they can hit snooze, and Geekbot will follow-up again via a Slack notification at a time of their choosing:

This way, disruption is minimal, but you’re not at risk of forgetting to fill out the meeting questions as you would be with a more passive platform such as Google Sheets.

Once the team members fill out the questions, their answers are collected and posted in a public Slack channel:

Team members can respond to the meeting updates, like they’d do in a normal Slack channel, creating a thread of replies between the relevant people without letting the Slack channel get off topic and disrupt others:

We’ve been using Geekbot everyday ourselves since launching in 2015, and we’re proud that 60,000+ users have signed up, including teams within GitHub, Asana, Sony, Salesforce, Shopify, and more. In fact, the Strategic Apps group at Zapier published a post on how using Geekbot made their meetings more productive.

If you’d like to learn more about how Geekbot works, feel free check out our getting started video below or read our reviews on Capterra.

Join over 60,000 users who run quick, asynchronous, and minimally disruptive standups in Slack.