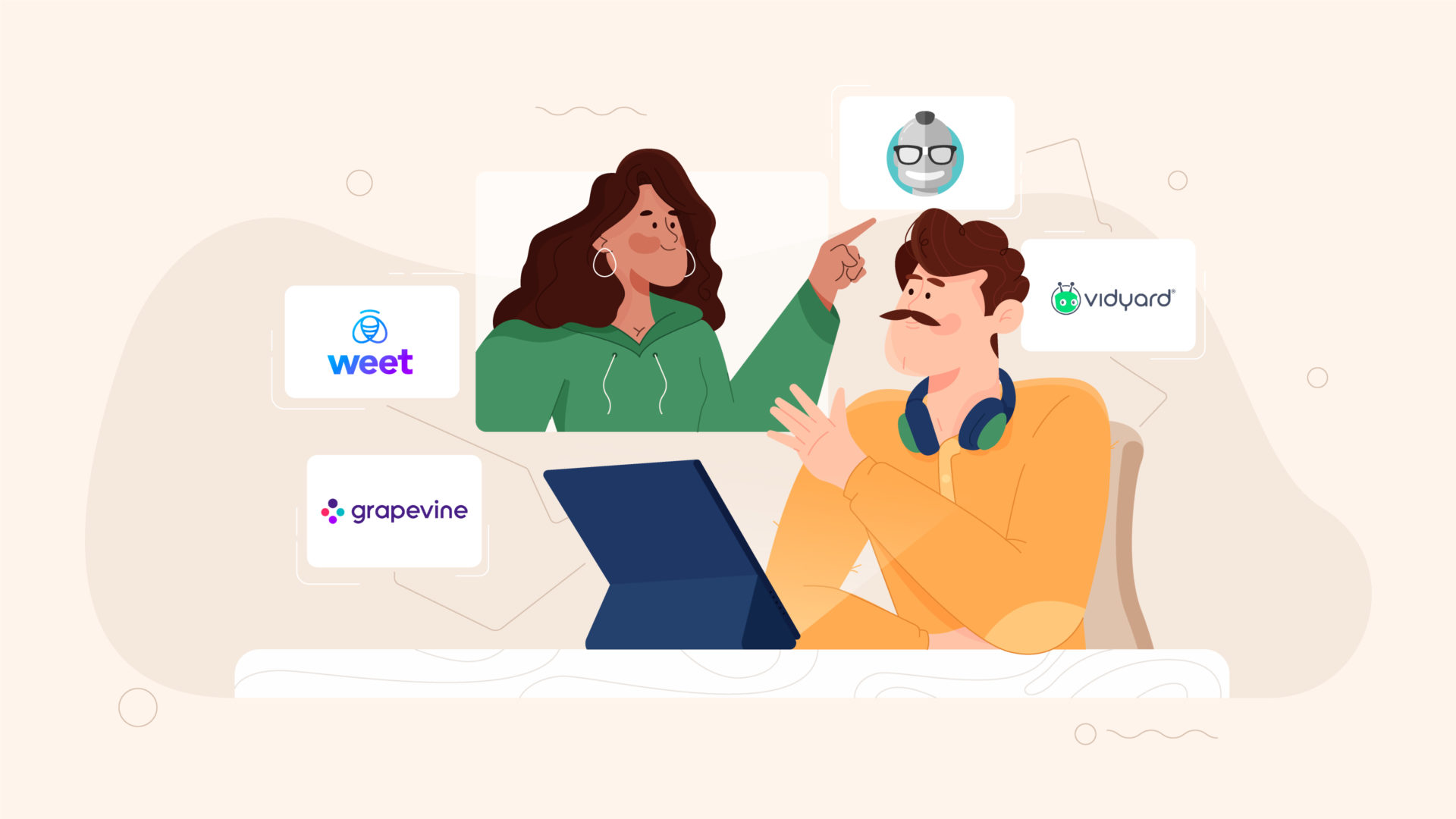 In this post, we’ll start by looking closely at two things:

Then, we’ll discuss why we built a free software that lets you run text-based asynchronous meetings (as opposed to using video), and the reasons it may be a better solution for your team. We’ll dive into the text-based vs. video software discussion in greater detail below, but here’s a brief snippet of what we’ll talk about.

Note: Geekbot is a text-based, asynchronous meeting software that is free for teams of 10 or fewer and integrates easily into your organization’s Slack or Microsoft Teams channel. Start your free trial today and join 100,000+ users including teams within GitHub, Zapier, GitLab, Dropbox, Shopify, and more.

The Benefits of Asynchronous Video Meetings

This solves some of the more frustrating aspects of holding synchronous meetings via video call or face-to-face.

Below, we look at three different asynchronous video tools:

How does Weet work?

At a very basic level, you start recording, and then share the video with the relevant team members. When they open the video, they can interact with it using emoji, video, and audio comments.

You can learn more about how it works by visiting their site, or viewing a quick video demonstration below:

Weet is specifically aimed at remote teams, whereas the next tool we discuss is aimed at educators.

Grapevine is specifically aimed at educators who want to provide their students with a quick video lesson, feedback, or update.

Note: There’s a 15 minute limit on videos made with Grapevine.

Grapevine is free for up to 5 users. When you go over 5 users, you’re then moved over to the Growth plan: $7 per user (up to 50 users). After 50 users, you’re going to need to contact Grapevine for a custom pricing plan.

Here’s a quick video so you can see Grapevine in action:

Vidyard is less for teams who want to replace meetings and more for individuals (public speakers, trainers, managers, etc.) who want to send their staff video notes.

So, if you’re not a fan of writing one of your employees long emails explaining a project, then you can just record with Vidyard and share the video.

Asynchronous video meeting tools solve the problem of holding in-person meetings or Zoom meetings. They’re quick, not disruptive to your workday, and easy to schedule.

But there are even more benefits to running asynchronous text-based meetings instead of asynchronous video meetings.

When you use Geekbot, your team fills out their meeting responses directly in their Slack account. For example:

The answers are then shared in a Slack channel of your choosing:

Teammates can quickly scan the responses and create a threaded conversation (if applicable) to reply to someone’s update, all without disrupting others:

How many times have you started to record a video, only to spend 5 minutes of the video trying to figure out what it is you want to say?

When you run text-based asynchronous meetings, you’re putting your thoughts down into words. This means you’re going to organize your message better, making it more thoughtful and concise.

You Can Easily Go Back to Edit Text Responses

After you record your video, if you realize you forgot something, you may need to re-do the whole thing or record another video to add in extra context. This is extremely frustrating, especially if you spent a lot of time on the first video (and there’s no guarantee that the second video doesn’t require a do-over).

In comparison, when you run text-based meetings with Geekbot, you can easily edit your answers at any time.

Text-Based Meetings Are Easier to Reference

What if you wanted to reference what was said in a video meeting update? (i.e. To revisit a great idea that a teammate recommended).

The best-case scenario is you remember the exact date the video update happened and the exact timestamp.

However, more often than not, you’re not going to remember when that video update was posted (especially if it’s more than a couple of weeks old). And when you finally locate it, you’ll have to waste time watching the entire video just to find one specific piece of information.

In addition, you may need to pause and rewind whenever you want to hear a specific part again.

Overall, this is an extremely frustrating and time-consuming experience.

In comparison, with text-based meeting software, referencing something is as easy as typing it in the relevant term(s) in the search box.

With Text-Based Meetings, You Can Get a Stronger Grasp of Analytics and Trends

Geekbot analyzes text-based responses and provides useful analytics that your team can act upon.

For example, using Geekbot’s sentiment tracker, you can quickly get a gauge of team happiness:

Geekbot analyzes the words in your team’s text-based responses to figure out if they’re “Happy”, “Unhappy”, or “Neutral”. This is useful because if the overwhelming majority of responses are negative, there’s likely an issue that needs addressing (before spiraling further).

This is just one example of data that you can act upon with text-based asynchronous meetings that you can’t easily get with video.

If you’re looking for a video-based meeting software, then we’d recommend looking at the tools covered above (Weet, Grapevine, or Vidyard).

But if you’re looking for a text-based tool that lets you run even faster and more convenient asynchronous meetings, try Geekbot.

Try Geekbot free for 30 days and join over 120,000 users who run quick, asynchronous, and minimally disruptive meetings in Slack (and Microsoft Teams).

What is the Difference Between Synchronous and Asynchronous Meetings?

Synchronous meetings are when everyone in the meeting is present at the same time. These can be in-person meetings or Zoom meetings. This can be a great thing for performance meetings or when you want to engage in back and forth conversation.

But synchronous communication has some drawbacks.

They can run too long, they are disruptive to your workday, and they can be difficult to schedule. This is especially true for distributed teams who have employees in different time zones.

That’s why companies like to use a mix of synchronous and asynchronous communication. Asynchronous meetings are when your team provides updates at their convenience.

There are clear benefits of asynchronous meetings:

Your team members can fill out their meeting responses at their own convenience and don’t have to worry about meetings going on too long.

You run an asynchronous video meeting when you don’t want everyone to have to be on the call at the same meeting time.

Asynchronous video meetings are popular for remote work because it lets one person record a video and send it to another team member, who can watch the recorded video at their convenience.

There are some drawbacks to using video meetings, however.

For example, it’s a little tricky to follow up with a video meeting. Some platforms, like Loom, let you respond in a thread to someone’s video but those are often overlooked messaging channels.

Plus, video messages are often tricky to reference. If you want to make notes of what was said, you’ll have to go back, replay the video, and take notes.

Finally, videos are recorded in real-time. So unless you pay extra for editing capabilities, you may be stuck recording several different videos until you get your message just right.