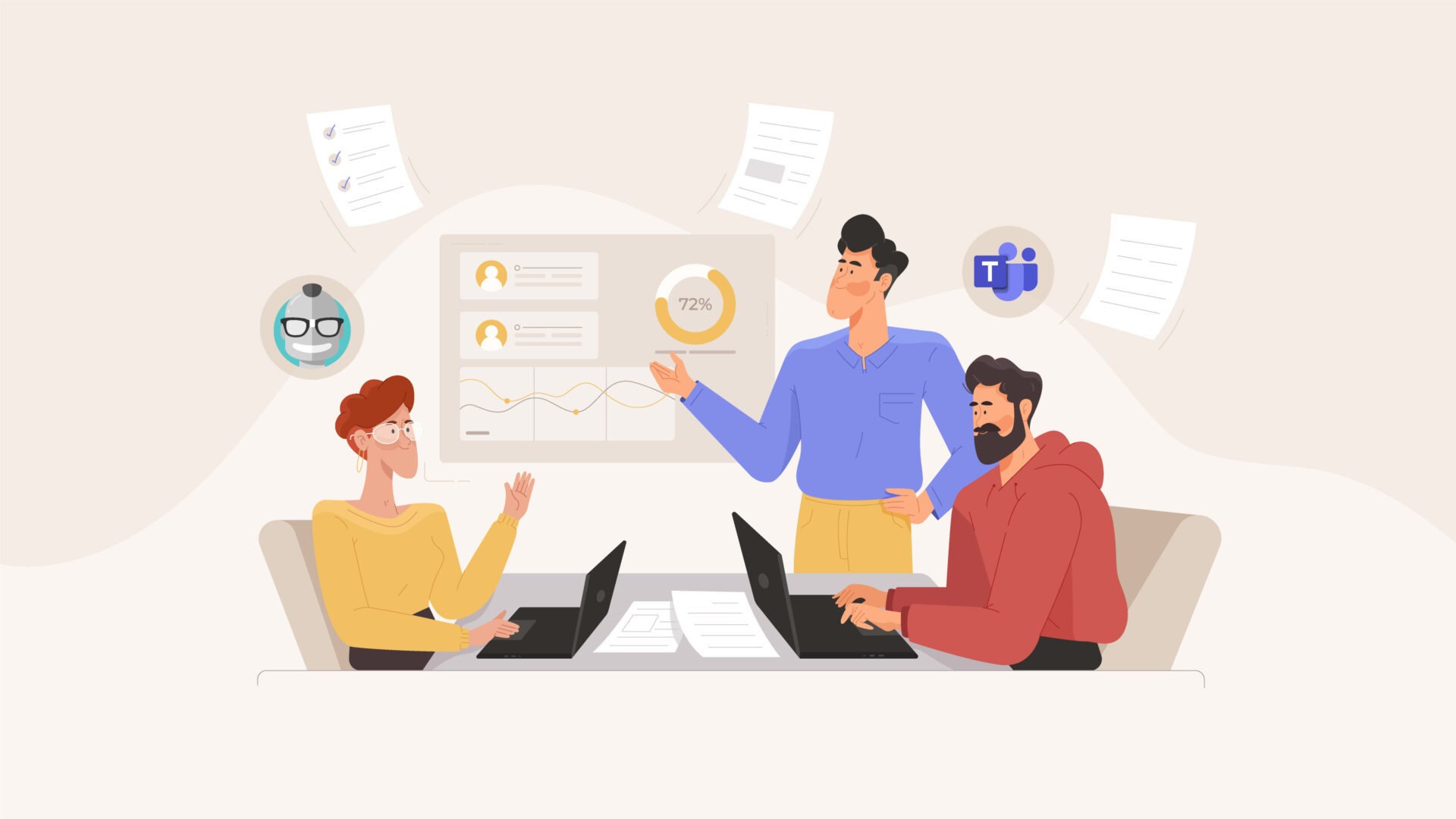 If the word “status meeting” or “team update” sends shivers down the spines of your teammates and yourself, you’re not alone.

The majority of companies struggle with team update meetings as well. In fact, up to 71% of meetings are considered unproductive both by managers and employees.

Employees say regular status updates distract them from work and can even make them anxious. Managers, on the other hand, criticize employees for incomplete and unfocused updates.

Seems like a situation where no one wins. Do we even need regular updates within teams?

Turns out, we do. Team updates yield many benefits for any company, but only when they are properly organized.

Let’s discuss the advantages of team updates, learn why most team updates don’t work, and how top-performing teams conduct work update meetings that benefit everyone.

Why Do We Need Team Updates At All?

Performing team updates properly will result in the following benefits:

Where Do Most Team Updates Go Wrong?

How to Run Effective Team Updates

Among many benefits of asynchronous meetings is that they don’t force team members to be in the same meeting. If you ever worked in a distributed remote team, you know how hard it is to gather people in the same video call – what’s an early morning for some teammates may be a late evening for others.

Another benefit is that asynchronous meetings are not disruptive. Employees can send their updates whenever they have free time instead of being distracted or spending half of their day waiting or participating in meetings.

Lastly, asynchronous meetings are short. When you have a shared meeting in real-time, you have to sit through everyone’s responses before it’s your turn to share an update with a team. Hence many update meetings run well over an hour. With asynchronous meetings, team members spend mere minutes posting their updates and can quickly get back to their work.

Team updates can take up a lot of time to set up, organize, and conduct regularly:

Combined, these tasks can eat up lots of hours of any manager who wants to keep team updates organized and make the most value out of them. The good news is that all these aspects can and should be automated.

Tip: Tools such as Geekbot allow to automate every aspect of team updates so that managers and employees could focus on creating value rather than spending hours on the organization. In the next section, we’ll explore how it works in more detail.

First of all, your team members probably already use messengers a lot. Therefore, they feel comfortable communicating and expressing themselves there. There’s also a higher chance they set up notifications and mobile apps to not miss any updates. Running team updates in messenger would not require them to learn any new tools and workflows.

Second, running team updates in team messengers allows you to utilize advanced features that Slack and MS Teams provide. For example, whenever a team member posts an update in Slack, other team members can later follow up via Slack threads. That wouldn’t be possible in a real-time meeting. 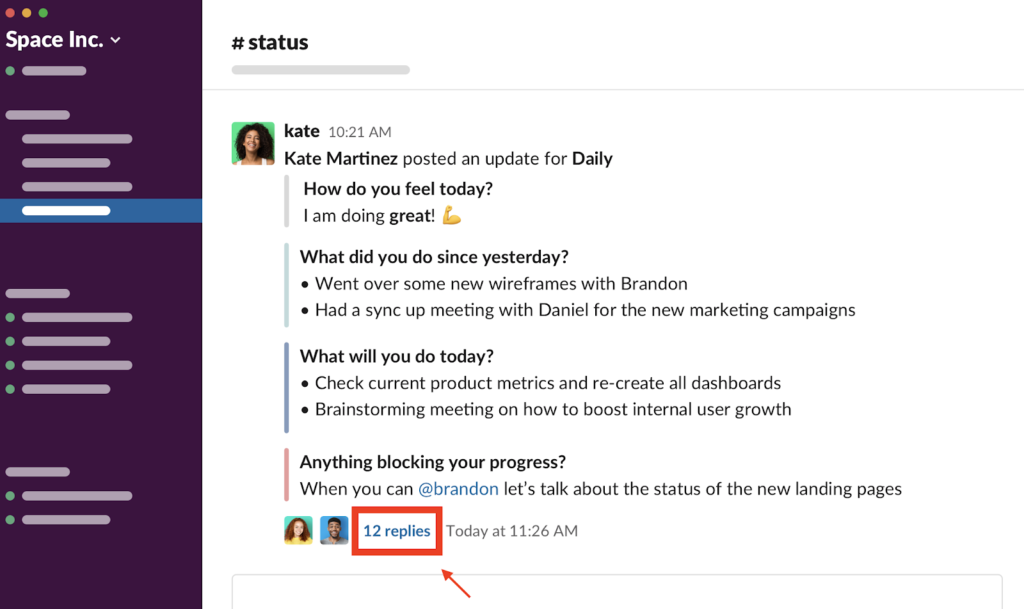 You can also use built-in search tools to browse through past updates or utilize 3rd party Slack integrations and MS Teams integrations to create even more advanced workflows.

Lastly, running team updates in Slack or MS Teams lets you keep everything in one place. Often remote teams struggle when all their data is scattered across several tools and services. Crucial data may slip through the cracks or get lost forever.

When you run all your team updates in Slack, you can create separate channels for your team updates to keep things organized. Other conversations, however, are just a tap away. You can, for example, quickly glance through today’s team updates and then check what the team discussed in more specific project channels.

We figured that the most beneficial team updates are asynchronous, automated, and run directly in Slack or MS Teams.

Sounds like a lot of work to achieve that.

Turns out, with the right tool you can set up such team updates in minutes.

Here’s a story about a remote team that saves about hundreds of hours every month, brings teammates closer, and keeps employees motivated through the power of asynchronous team updates.

What Was The Problem?

A remote team developed a popular software product. Half the team was working in the US, and the rest were spread throughout Europe and India.

When the team was small, running team updates wasn’t a big issue. These would take 10 minutes and everyone could go back to their tasks.

But as the team grew, running team updates became a nightmare for everyone. Gathering everyone in the same call was counter-productive. For example, developers would waste hours listening to updates from non-development departments. Due to the time difference, some people couldn’t wake up that early while others came exhausted after a long day.

Managers tried to schedule several team updates for different departments and time zones, but soon found out they spend roughly 40% of their day organizing and running these meetings.

Worse yet, running separate team updates led to data fragmentation. Only managers who attended all meetings knew what was happening in the company. Once united, the team split into smaller groups that operated within their own informational bubble. Different departments stopped communicating and no longer were willing to help each other. Some team members started to feel isolated and left out.

Because developers now communicated with less transparency with other departments such as support and QA, the software product now had more defects than ever. User feedback got worse. Team morale dwindled down. Turnover increased. The growth rate slowed down.

As per recommendation, the company decided to try Geekbot. There wasn’t much risk as Geekbot worked well with Slack, their primary team messenger, and offered a 30-day trial with no restrictions.

After adding Geekbot to Slack, here’s how they set it up:

But the best part is that people were not forced to answer the questions as soon as they receive them. Geekbot would patiently wait for answers throughout the day and may only send a notification from time to time.

As a result, employees were able to participate in team updates whenever they had free time.

Better yet, they never had to wait for anyone and only dealt with their questions.

4.  Geekbot automatically gathered all updates from every team members in a standalone channel: 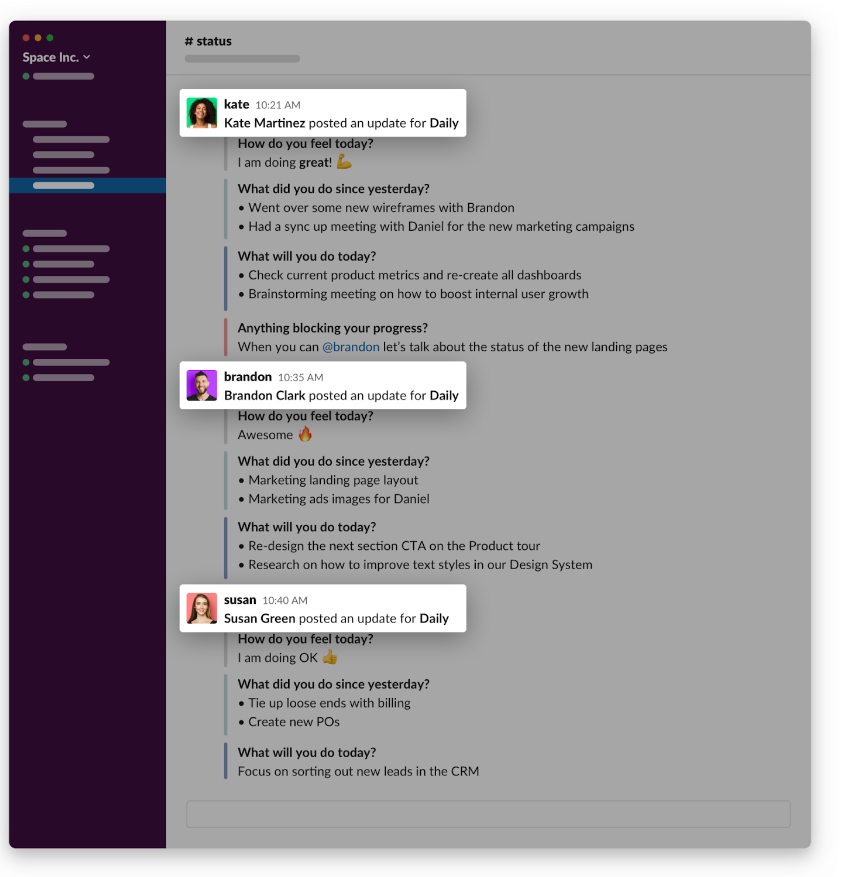 As a result, everyone could go to that channel and check updates from people they are interested in. Managers could create private Slack channels so that only they could see updates from the team, but they wanted everyone to know what was happening in the company.

Team leads learned that developers felt most energized at the beginning of the sprint and least in the middle. They learned the issue was with a poor estimation of workload, and developers simply didn’t have much to do a few days into a sprint.

After fixing that, once again, developers became more productive and engaged throughout the entire sprint.

As you’ve seen, team updates are a double-edged sword.

Executed poorly, they start draining the time and energy of your team members while taking a toll on the team’s productivity and morale.

But when done right, team updates are an invaluable tool for keeping your team focused, aligned, and energized.

If you struggle with making the most of your team updates or feel like you can get so much more value out of them, try running asynchronous team updates directly in Slack or MS Teams with Geekbot.
Geekbot is free for small teams with up to 10 members and offers a 30-day full-feature trial for larger companies. Join the likes of Shopify, Gitlab, and Github who already used Geekbot to get rid of useless meetings and reinvent their remote productivity!

Should you Run Weekly or Daily Updates Team Updates?

Running daily or weekly team updates comes down to either preferences or type of the projects your team typically works on. For example, product development teams would benefit from daily team updates because they deal with many unique tasks over the course of the project and require more alignment. Helpdesk teams handle more routine and repetitive tasks, so weekly updates can be a better fit.

There are templates for weekly check-ins and daily updates that can be repurposed for team updates. You can use excel templates, google sheet templates, or notion templates that your team members will gradually fill over the course of the day.

How to Give a Status Update in a Meeting?

To avoid long and unproductive meetings, make sure to prepare your status update before the meeting starts. Briefly outline tasks you were working on since the last update, your progress, and any roadblocks that may prevent you from completing tasks. To reduce time spent on status updates it’s recommended to run them asynchronously and directly in team messengers.