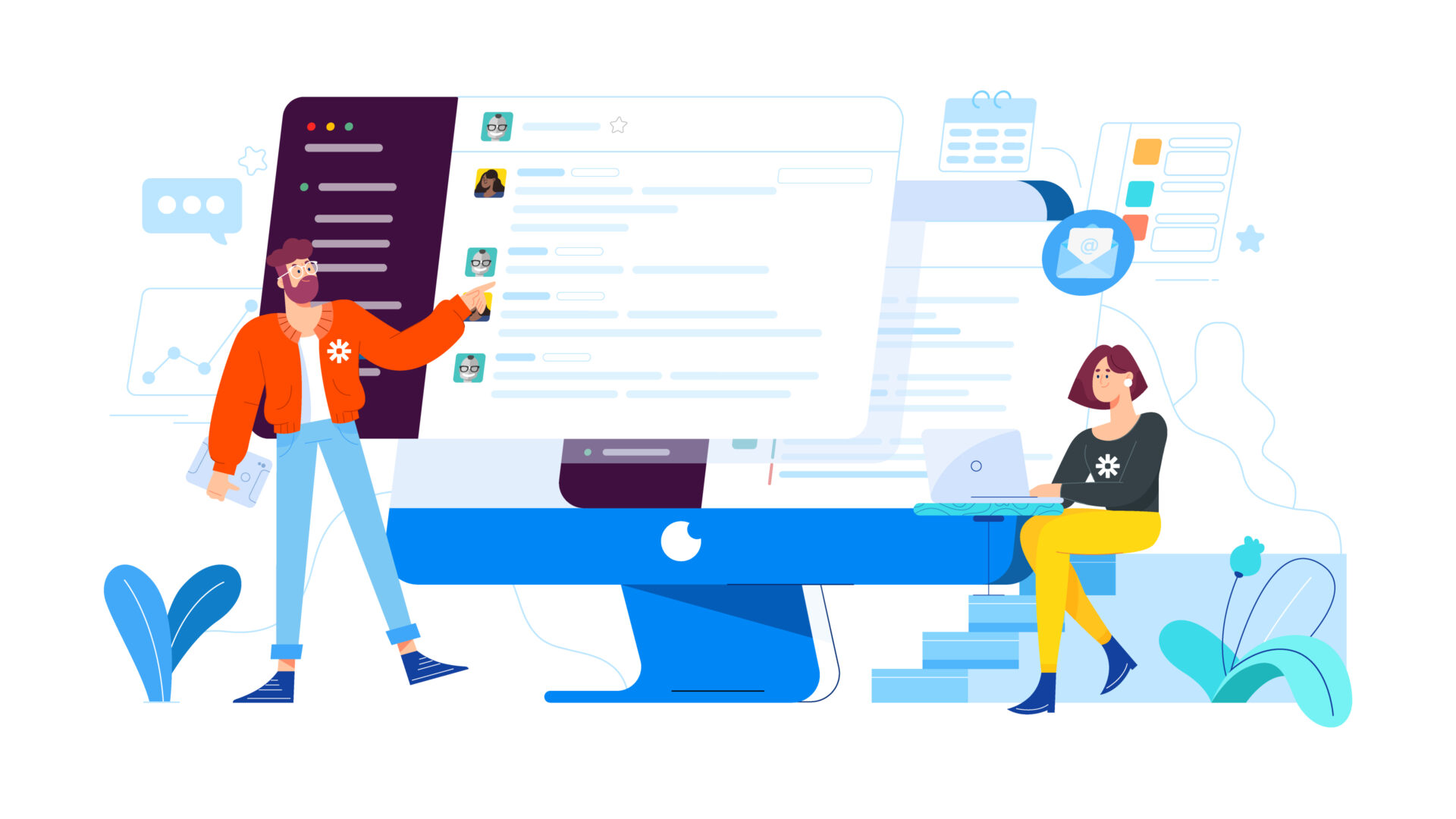 Home > Remote Work > How to Save Time on Daily Standup Meetings: Zapier Story

Daily stand-ups. The cornerstone of agile methodology. In fact, 87% of agile teams employ daily stand-ups in their day-to-day operations. And they all struggle.

There are 100 situations where your daily standup can go south. And then there are 100 more on top of that.

An engineer shares with his team what he made throughout yesterday, and then suddenly ten people are silently listening to his passive-aggressive rumble with a project lead. For half an hour.

A customer champion gets carried away a bit, bragging how well the support team addressed the sudden flood of support tickets. 1 hour later…

Ok, enough. Yes, we get it. Stand-ups are tough cookies. Yet Zapier’s team was having none of it. By simply switching from chaotic meetings to organized Geekbot asynchronous standups, they saved a lot of time, a lot of nerves, and a lot of remote life / balances.

But let’s go through their triumph piece by piece.

A typical, ideal stand-up meeting is supposed to last between 5 and 15 minutes. It’s got to be short, actionable, and all while standing up. Easy concept, but highly improbable for remote teams where people mostly work from home, while never being in the same room.

The same thing was happening to Zapier. This is how Scott Williams, Zapiers’ Engineering Manager recalls one of their typical stand-ups:

Engineer A: “Ok, yesterday I went to update the polling code for the Framistat service, but the bit twiddler was erroring out, so I’m blocked.”

Engineer B: “What were you sending to the bit twiddler?”

Engineer A: “The spine reticulator state.”

Engineer B: “V1 or V2? What about the new permissions header?”

Engineer C: [looking up from their phone] “Oh, Christina was working on the bit twiddler. I think she changed something.” [Christina is on another team]

And that’s just during the first five minutes. The team quickly realized how often their discussions lasted far longer than the standard 15 minute mark. Worse yet, most of these conversations were about… something. No one could actually remember what they were discussing, yet everyone was exhausted.

Given that stand-up meetings are usually held in the first part of the day, it’s not hard to imagine how big of a negative impact on team’s productivity those meetings had. So the first point was somehow to shorten those meetings and make them more focused. This is where Geekbot came into play.

It would automatically send every team member four questions directly into Slack, at 9 a.m.:

Then every colleague would answer those questions, and their answers would be broadcasted to a designated Slack #channel, where everyone on the team could see them.

Simple, right? But it changed everything. Suddenly everyone could answer the typical standup questions at the most convenient time. More importantly, answering questions would take everyone less than a minute, instead of the usual 30 minutes. That’s 97% drop in daily standup’s duration.

On top of that, everyone became much more focused. Instead of rambling, bragging, and trailing off, people were sending simple answers to simple questions. Everyone could see how other people responded to their questions, and quickly adapted to the new format of reporting: actionable, short, and on-point.

But there were even more benefits.

Stay aligned with your remote team with Geekbot daily standups.

Zapier’s team quickly discovered how well Geekbot works with other Slack features, such as Threads.

When your team answers Geekbot’s questions, all the answers are fed into a single channel. This is where all team members can see their own replies and the replies of their colleagues. And this is where Slack Threads come most useful:

For example, a QA engineer sent a reply to Geekbot’s question “Anything blocking your progress?”, wondering why she is sometimes unable to open a registration panel after noon. Seeing that message in the common channel, one of  the senior developers opened a thread directly within her message. Couple of other engineers chimed in, and eventually found the problem and the solution. All that at the cost of NO time for anyone who wasn’t involved in the discussion.

Geekbot’s synergy with Slack enabled Zapier’s team to have side conversations without forcing other people to listen to them and wasting their resources. Finally, anyone could join any thread at any moment, so, for example, developers could easily finish their tasks at hand and then scroll through Geekbot’s responses to see if they could be of help to anyone this day.

On average, every employee experiences 87 interruptions a day. And we’ve talked about distractions at the workplace a lot in the past. They are really hurtful to teams’ productivity, especially in remote teams. Ineffective stand-ups just add up to this problem.

For example, ineffective stand-ups create a bunch of “loose ends.” That means people talked about everything, but they haven’t solved a single one of their original problems. At the same time, everyone wasted a lot of time. So, what can teams do?

First of all, facilitate a distraction-free environment in your remote team. Tools such as Geekbot do that out-of-box because team members are free to report whenever they are available, and don’t have to do that if they’re busy with the task at hand.

In addition to that, team members don’t have to listen to their colleagues all at once during meetings. They don’t risk being dragged into unnecessary and inefficient conversations. Instead, they can scroll through the Geekbot’s feed and see what their colleagues work on, without having to ask and distract them as well. Better yet, they can help other team members at the most appropriate time of the day — when they are free of their main tasks.

Finally, managers should be able to see the big picture of how their team works and what are the main struggles. For example, at Zapier, managers were encouraging people who don’t share much in their answers to share more, and vice versa. At the same time, team leaders were able to track each employee’s productivity over the course of a week because Geekbot acted as a historical log of everyone’s tasks and roadblocks. All you have to do is just scroll the Slack channel.

Daily stand-ups are not good or bad per se. It’s a very effective and simple agile practice, but sometimes it can be a challenge making standups work for your team.

Fortunately, Zapier’s team proved that there can always be ways to make things better. Using Geekbot, they were able to make their stand-ups short and actionable. Better yet, they’ve used its unique synergy with Slack to sustain rich and highly-beneficial side conversation, while sustaining a distraction-free environment.

If you want to try Geekbot for your team, it’s as simple as it can be: just add Geekbot to your Slack and see if it works for your team during our free trial. With no additional fees you can get a taste of how productive can asynchronous daily stand-ups be for your remote company, while keeping your team members happy and engaged.