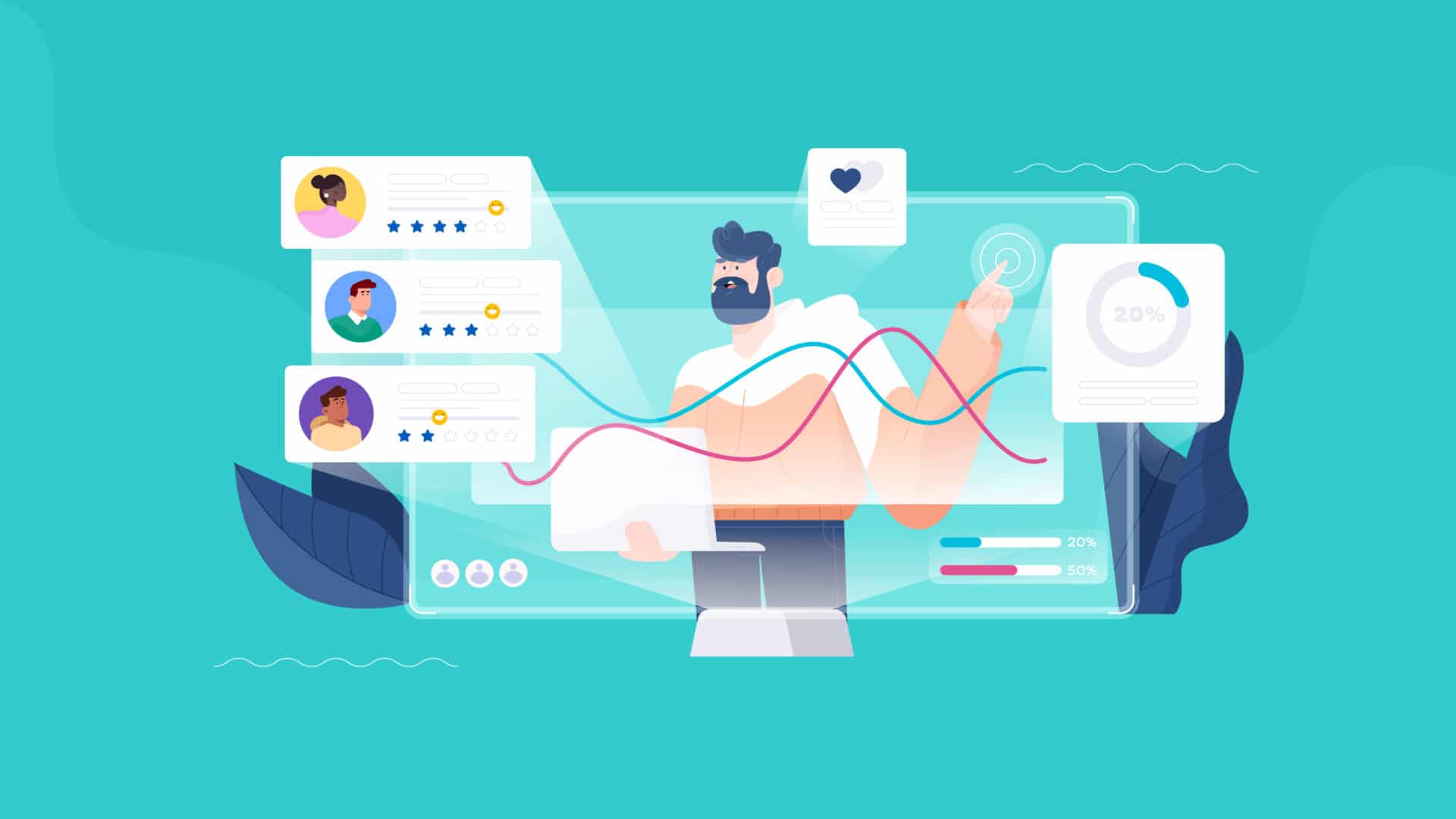 Happy team goes a long way — we all know that much. Research seems to perfectly back it up: companies with happy employees outperform competition by up to 20%. Happy employees are more productive, more motivated, and more loyal to the companies they work at.

But how do you make sure that your team is happy and engaged? Surely you can test your luck and throw in a couple of team building exercises or free snacks hoping it will keep everyone happy. But what if your efforts made everyone secretly roll their eyes?

Team happiness is a tough nut to crack, but one thing is sure: Top performing teams know when they are happy and when they are NOT.

They don’t leave their performance and well-being to chance. They know exactly what works for them and what doesn’t. Yet up until now it took a lot of effort to learn how your team actually feels. The process involved lots of anonymous polls, 1o1 discussions, and complicated formulas that may confuse even psychology undergrads.

We found an easier, more effective, and more accurate way to discover about how your team really feels.

But before we dive into how Geekbot Sentiment works, let’s first talk about why teams struggle with measuring their happiness levels and why knowing how your team feels has never been as crucial as now.

Measuring team happiness levels has always been a task both crucial and complex. Worse yet, there are so many things that can affect a team’s well-being: inefficient management, unusable tools, and most recently, the forced switch to remote work.

Each of these issues can potentially disrupt team happiness and affect teams’ performance in the long term. The worst part is that even small issues sometimes snowball and with time can impede the whole team’s work efficiency.

The onboarding process at one company was so flawed and inefficient that every time the new employee would come aboard, the whole development team delayed a release of new features for at least two weeks.

Needless to say, this caused friction between developers and the HR department and ultimately led to a low-trust team environment. Issues like that can be easily spotted and resolved early when teams regularly monitor their happiness levels. But it’s not as easy as asking everyone “How happy you are on a 1 to 5 scale”.

Up until now the two main ways to monitor team happiness were complex polls and 1-on-1 sessions with management.

Although effective to a degree, both polls and 1-on-1’s have a set of drawbacks:

To solve all of the above problems and monitor team happiness levels more accuratelн, we’ve developed the Geekbot Sentiment feature.

Here’s how it works.

Geekbot already helps thousands of teams to boost their productivity and run effective standups and retrospectives by answering simple questions directly in Slack.

And we recently introduced a way for teams to monitor happiness using the same question-led technique, called Geekbot Sentiment.

Geekbot Sentiment can be a standalone survey — or it can form part of the daily standup, keeping all team-related information in one place. Users simply add a question to a Slack survey like, ‘How do you feel today?’ And once a teammate shares their response, Geekbot interprets the use of language and identifies how that person currently feels.

The bot then quantifies the sentiment as positive, negative or neutral. And the Team Happiness graph updates, displaying the interplay of two separate curves and showing the overall sentiment of the team.

How does this all work in the backend? Geekbot crunches the data using an in-house NLP-AI algorithm. And we show the results in your interactive sentiment dashboard:

Geekbot can recognise the status sentiment of the team member and quantify it into positive, negative and/or neutral status.

This is your real-time Team Happiness dashboard that you can use to track team happiness levels over time.

You can ask any question, you can modify how often Geekbot asks your colleagues this question, and you can configure who Geekbot will ask the question.

For example, you could set up Geekbot to ask “How did your day go?” to all your developers, every day.

You can ask pretty much any question you want. And Geekbot will gather the replies, analyze them, and automatically build the Team Happiness dashboard over time.

Main benefits of Geekbot Sentiment when it comes to measuring team happiness:

We can think of many ways to make the most of Geekbot Sentiment. But one of our favorite examples is how a remote team used it to restore morale when things were getting tough.

The remote team in question was focused on a SaaS-marketing project. They had been working on it for a couple of years, then one day, the company founders noticed how the developers were seemingly disengaged during a brainstorming session.

They were offering fewer ideas. They demonstrated less enthusiasm for new features. And they were simply disinterested in improving the product — but while the general feeling of dwindling morale was visible, it was hard to pinpoint the exact source of the problem.

Thankfully, the team was already using Geekbot to run daily stand ups in Slack. And when the Geekbot Sentiment feature was released, the founder knew he had to try it right away.

He added the question, “How was your day?” for developers to answer every day. And while he didn’t notice any change for a couple of weeks; by week three, the founder tweaked a certain pattern emerge in the Team Happiness Dashboard:

Every two weeks, on a Monday, there was a plunge in team happiness metric. There was only one major event that was taking a place at the same time: Sprint Planning session.  Upon further investigation it turned out that the marketing lead, who was also recently assigned as a product owner, was regularly adding more tasks to the Sprint backlog than the team was able to comfortably finish during the Sprint.

Because of that, the development team was regularly failing to meet Sprint objectives over and over, which negatively affected their morale. After the problem was explained to the marketing lead, one of the key rules of Sprint was reinstated: the team was evaluating and defining their Sprint tasks by themselves.

Within a month the team’s morale was restored, which led to increased productivity during the Sprint, more active brainstorming sessions, and a sudden boost in customer satisfaction and NPS scores.

Geekbot can do more than restore team morale. It can help build personal connections, even when teams sit as far apart as Syndey and the West Coast.

Just look at how Jean de Plessis, manager of several remote teams at GitLab, uses another Geekbot function to help his teams connect. Jean noticed the GitLab developers lacked any visible internal bonds: mainly because the teams never actually see each other in person. He heard of feelings of isolation, and consequently, he saw motivation start to wane.

But he was finding it hard to keep his finger on the pulse of his team’s wellbeing in a remote setting: and if one individual was experiencing a personal issue, it could easily go unnoticed. Jean needed a way to become aware of any problems so that he could step in and help.

He decided to place the Geekbot Wellness template front-and-center of his strategy. And he got Geekbot to ask the following check-in question in Slack at the start of each week:

(Side-bar: RAG status works just like a traffic light — green is positive, red is negative, and amber sits somewhere in between.)

Once Jean has the answers, he can quickly scan the colors and see if a teammate is feeling down, unmotivated, or close to their limits. He can then act on this information and offer support where needed.

The strategy has proven particularly effective as teammates use the check-in to express their feelings and make sure they’re heard — while they feel motivated by the fact their manager is taking an active interest in their emotional wellbeing.

After all: it only takes a few words of encouragement to turn someone’s day around and re-energize them.

Team Happiness Is an Ongoing Effort

Making your team happy is not a one-time thing — it’s an ongoing activity. But it’s well-worth the effort. Knowing when your team is happy and proactively making sure it stays that way allows your team to operate at their maximum efficiency.

Prior to that measuring your team happiness was not an easy task. Luckily, with advances in sentiment analysis, we can measure team happiness levels not only effortlessly, but more accurately than ever.

Sentiment is part of Geekbot, a Slack bot that helps remote teams to operate at their maximum efficiency and reduce the number of useless meetings to zero.

The best part? You don’t need to spend a single dollar to check whether Geekbot works for your team. Try it free for 30 days and let us know about your results!