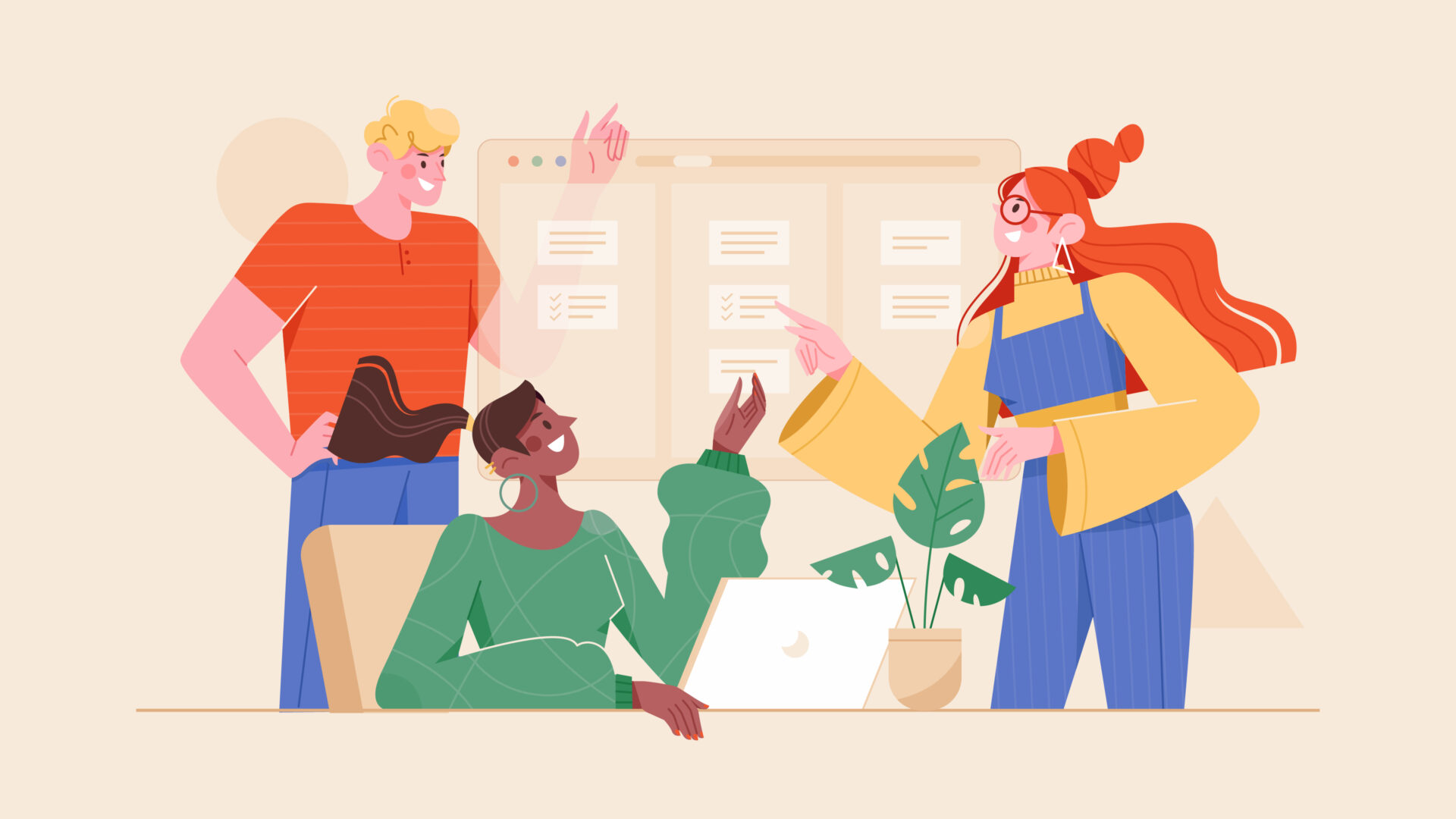 Let’s cover the most effective and fun retrospective games that you can conduct at the beginning, during, and at the end of your retrospectives.

Note: If you want to run effective scrum retrospectives and daily standups directly through  Slack and keep your level of team collaboration and engagement at an all-time high, try the 30-day trial Geekbot.

Games At The Beginning Of Retrospective

Retrospective games at the beginning of the meeting serve either as a virtual team ice breaker or as a way to gauge how the team feels about retrospectives in general.

Let’s cover these games in detail.

During this game every participant reports their attitude towards the retrospective as either Explorer, Shopper, Vacationer, or Prisoner.

Explorers want to discover new ideas and insights.
Shoppers analyse information and want to learn at least one useful idea during the realtor meeting.
Vacationers aren’t interested in retrospectives, but like being away from the daily grind.
Prisoners feel forced to attend the meeting and would prefer doing something else.

How to play ESVP:

A great ice breaker before the actual retrospective starts is to ask your team to describe the latest sprint using symbolic representations.

How to play Symbolic Sprint:

Ask all your team members to describe the latest sprint as:

For example, one of your team members might jokingly label the latest sprint as “The Fall of the Berlin Wall,” whereas their teammate would rather use the “Mayflower Expedition” comparison. Ask participants why they picked a certain event or symbol and you’ll be amazed by the insights that might follow.

This game allows team members to talk about certain problems indirectly and facilitates less filtered feedback. Also it’s a funny and creative way to kickstart your meeting and set everyone at ease.

This game is recommended for more experienced Scrum teams with high levels of trust.

How to Play Truth And Lies:

Every team member comes up with three statements about the team, sprint, or anything you decide relevant to your team performance. But here’s the catch: two of these statements should be truthful, and one — false.

Team members then share their three statements with the rest of the team. The team should collectively guess which statement is false.

Watch closely for the statements that are debated the most as those indicate what issues in your team are the most contradictory and may potentially cause extra friction within the team in the future.

The primary goal of the agile retrospective games that are conducted during the retrospective is to gather as many insights into team performance and struggles as possible for future analysis.

Issues such as low trust environment, poor management, and low level of engagement prevent team members from sharing their feedback. The following games are designed to elicit the most honest and actionable feedback from participants.

This “Mad Sad Glad” is probably the most common scrum retrospective game.

The goal of the game is to gather feedback from participants and at the same time gauge their feelings about the process.

How to play Mad Sad Glad:

Ask every team member to write at least one thing for every column, and then group similar issues into clusters.

After that, discuss the clusters of issues by asking your team the following questions:

This graph-like retrospective game allows teams to laser-focus their attention on specific issues.

For example, teams can evaluate how they conduct meetings or how they foster relationships with outside stakeholders.

How to play Wow, Wondering, Worried

Create a graph with a horizontal axis depicting workflows or items you want to rate and vertical axis with three predefined labels: Worried, Wondering, or Wow.

Team members then need to rate every item on the horizontal axis.

In the end you’ll have a visual representation of what your team thinks about every meeting or item on the X axis.

For example, seeing the amount of “worried dots” at “Daily” you might notice that the team is largely concerned about daily standups.

Upon further investigation you can learn that the team thinks that daily standups are ineffective and exhaustive, and start looking for a solution.

2×2 is both an extremely versatile and engaging game to collect feedback from your team members. The best part is that you can change the format every retrospective to keep your meetings fun and engaging.

To play 2×2, simply draw a two-on-two box and fill every section with an emoji, a symbol, or a word that can describe what team members think about your process. Play around with ideas!

For example, use four architectural monuments and ask your team members what felt like building a pyramid during the sprint or ended up being your fabulous Taj Mahal. Or go with animals: what was your slow turtle, your mighty lion, a slimy snake, or a lost puppy.

The goal here is to get your team creative and facilitate the process of sharing ideas in a new and fun way.

Ask every team member to write at least one card for every section and then analyse their feedback. You don’t have to use the same labels every time, so feel free to experiment to keep things fresh.

Games At the End Of Retrospective

The following agile games will help Scrum teams to become more focused, to put previously gathered data to action, and to end retrospective on a positive note.

Often the problem with retrospectives is that they are not actionable: people just meet, talk about issues, and leave it at that. The SMART planning aims to help people design improvement plans that can be executed during the next sprint.

How to play SMART Planning:

Simply share with your team the image that explains what SMART goals are and ask team members to propose SMART actions that can improve the team’s performance during the next sprint.

After that put all the SMART actions into one place, group similar actions and prioritise those that your team aims to execute next. Save the list for the next retrospective to discuss your progress and execution.

Return of Time Invested is designed to help agile teams to assess whether their retrospectives are productive.

How to play Return of Time Invested:

Draw a chart and ask your team to indicate how useful and actionable the current retrospective was in terms of finding issues, gathering feedback, and general organization.

To elicit more honest feedback explain that there won’t be any discussion about the chart and you will simply use this data for future comparison.

The chart works best when compared to charts from previous sessions and used for checking the positive or negative dynamics over time. The findings can be later used for cross-checking results with ESVP or during the “Wow, Wondering, Worried” game.

Game #9: Letters to the future

General feeling of purpose increases your team productivity. “Letter to the future” game helps teams to look beyond the current issues and environment when writing about their performance.

How to play Letters to the future:

Ask participants to write a letter on how they see their team performance in one month or three months. Try focusing on the positive outcomes, e.g. the finished project, or a yearly team offline meeting.

Note that you should not share these letters with others at the beginning. After the project ends you can read out the letters if the person who wrote it agrees.

One Question is a great game for ending your retrospectives on a positive note.

How to play One question:

The crucial detail about this game is that the question should be framed positively. For example, ask participants to share one thing they improved during the last sprint or ask them to give praise to one of their team members.

Closing retrospective on a positive note helps team members to associate retrospectives with positive experiences and frame retros as an improvement-related rather than a problem-oriented discussion.

We hope that these retrospective sprint games will help you make your retro meetings more productive and colourful. Don’t hesitate to mix them with your workflow or adjust them to your needs.

If you are a remote team and want to have focused and engaging daily standup meetings directly in your Slack, try Geekbot free for 30 days!

Join thousands of teams that use Geekbot to automate retrospectives, standups, surveys, and daily reports.

How do you make a retrospective fun?

How do you make a good retro?

What are the activities you do in the sprint retrospective meeting?

A typical sprint retrospective meeting consists of four parts: warm-up, data gathering, data analysis, and actionable output production. During warm-up, you can ask icebreakers questions, praise achievements, or survey team mood. During the data-gathering stage, you employ various methods to collect honest feedback from your team members. After analyzing insights, your goal is to collectively produce a list of actionable items that improve your next sprint’s performance.