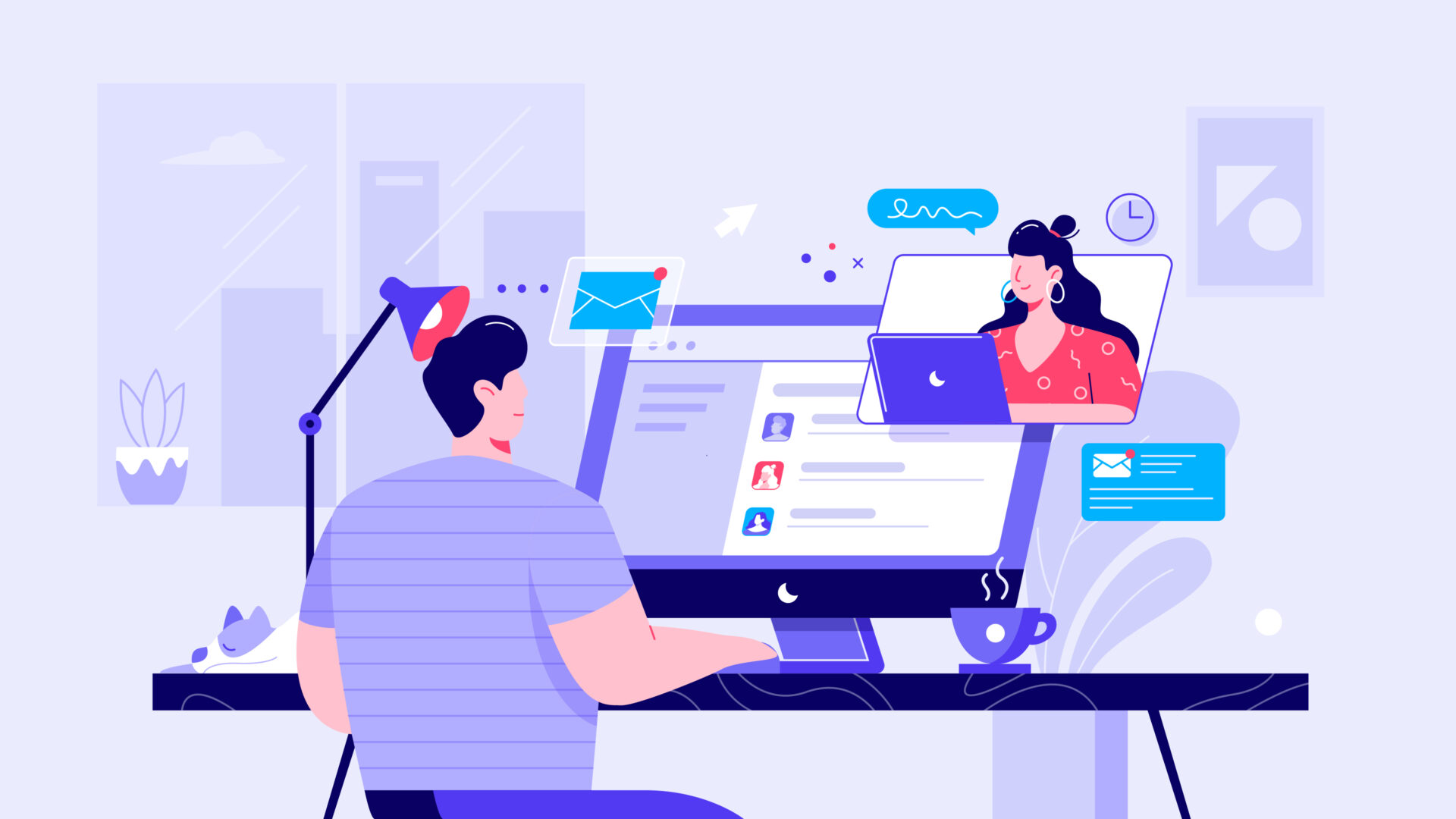 The recent COVID-19 outbreak changed the landscape of remote work beyond recognition.

Without a fair warning, hundreds of thousands of people, following the guidance of the World Health Organization, effectively isolated themselves at home.

Companies all over the world played a major role in the process, urging their employees to work remotely whenever they can. What started as a precaution perhaps might eventually become the groundings for the biggest ascension of remote work culture in our lifetime.

In this article we’ll talk about how businesses adapt to the new reality, what challenges remote work imposes on teams that have never tried it before, and how we can stay as productive as possible in the light of the current events.

According to SHRM, the number of companies that offer remote work options between 1996 and 2016 increased by 300%. And with an annually growing number of freelancers, the trend for remote work was growing steadily.

Yes, just a few months ago remote work was a trend.

But now, after the recent events, it has become a necessity. Following World Health Organization’s announcement of a COVID-19 pandemic and government lockdowns in several countries, companies have no choice but to force their employees into working from home.

Some companies were quick to develop appropriate policies to keep their employees safe. Even before the lockdowns, major tech giants such as Google, Facebook, Microsoft, and Amazon all developed recommendations, encouraging their staff to work remotely whenever it’s possible. Eventually, as the virus spreaded, those recommendations became mandatory.

Even companies that at first were hesitant to the idea of remote work, such as Charter and Microstrategy, are now, due to social pressure and media coverage, providing such an opportunity for their workers. Other companies, having already transferred their employees to remote work, are now actively supporting them in this transition. Shopify, for example, offers all of its 5000 employees a $1000 stipend to purchase office supplies and help ease the transition, while Facebook provides their workers with free Portal video chat devices.

Yet tech companies are not the only ones who have to undergo such a transformation. Some of the largest companies in the world, including Ford, General Motors, and Unilever advised their office workers to stay at home in order “to limit the potential spread of infection”.

At the same time, companies such as Google and Amazon, as well as global recruiting agencies, announced their move to online job interviews for the time period. As Glassdoor reports, the number of COVID-related job postings has tripled in the last week.

Surely, this overflood of remote workforce has largely increased the demand for remote-work startups. Conferencing apps, such as Zoom and Slack, have risen almost fivefold since the beginning of the year. Microsoft Teams, an online team communication tool from Microsoft, captured a recording number of 44 million daily users amid the outbreak.

Although there are hundreds of applications, services, and tools that facilitate the transition to remote work, a large number of companies and employees perceive the process as a burden rather than a solution. While some of the companies, such as Shopify, are used to operating remotely, others struggle to adapt to the new reality.

In the next section we’ll talk about the most common struggles every business faces when its workers are forced to work remotely, and the possible solutions to each problem.

The Struggles Of Transition To Remote Work

Teams that have been remotely working for a while not only learned to work around limitations of remote work, but discovered its many benefits. If anything, remote teams can be more productive, more aligned, and more diverse.

Unfortunately, companies that just recently have transitioned to remote operations are not aware of hidden pitfalls of remote work. An improperly organized process can lead to low morale among employees, lack of coordination, and general dwindling of productivity.

In order to help remote teams to bring up their operation to their optimal productivity levels, we’ve gathered the most common pitfalls and how to effectively address them.

Communication is the basis of a normal team operation, and office always played a major role in facilitating this process. Whether it’s chit-chatting with your colleagues at a water-cooler, or a weekly meeting of back-office managers, there’s always a lot of information flowing around you in a shared office space.

When employees are just starting to operate from their homes, they often resort to using email, and occasionally, phones. Naturally, this sudden lack of communication is attributed to the burdens of remote work. That doesn’t have to be the case.

Solution: think of this transition to remote work as if your company opens a new office. Every time a new office is being opened, the company sets up phones and organizes workspaces before inviting anyone in. And when new workers come into the office, someone is usually there to explain them what to do and how to operate in this new environment.

The same should be true for remote work. Company leaders have to provide tools for efficient and constant communication between all employees and explain those to them as if everyone is invited to the new office. The process should start with outlining the whole communicational landscape, which should include:

If your company just recently transitioned into working remotely, we’ve prepared an emergency kit for a fast remote shift with all the tools you need to quickly set up the crucial operational processes during this rapid transition.

The messenger, such as Slack, or Microsoft Teams, becomes the central hub of all communications that team members hold. Note that personal messengers, such as Skype, or WhatsApp, can’t work as a central hub due to their limited set of features.

Slack, for example, as a professional messenger for remote teams, can be integrated with other tools such as task boards and emails, so that you can connect as many communication channels together as possible.

For example, a common scenario would be to use Zapier and connect Slack with Trello and Google Calendar, so whenever someone creates a new task or meeting, it’s posted on a Slack channel for everyone to see.

Simply put, the main goal at this point is to give employees as many ways to share their actions and thoughts with colleagues as possible.

The reports from people who were forced to work remotely are mixed. Unfortunately, some of them have noticed a negative impact on their productivity in isolation. Staying at home, anyone is a subject to constant distractions from both within and outside.

When you work from home, family members can make it hard to focus on the task at hand. At the same time, the more relaxed home environment can make it harder to concentrate. Procrastination is just one Youtube video away, and there’s no manager around to silently disapprove of the lack of work done.

Solution: research shows us that remote workers can actually be more productive than office workers. However, they are some crucial steps that need to be addressed in order to achieve a plausible level of productivity at home.

Some of the remote workers report isolation as one of their struggles during remote work, stating that it negatively impacts their motivation and engagement. So what can leaders do?

Solution: first of all, it’s important to realize that loneliness is an emotional state that occurs not because of a physical isolation, but because of lack of communication with others. That is why it’s paramount to management to establish both proper work-related and casual communication.

In an office, small-talk occurs on a constant basis. Why? Because people can see and hear when other people are talking about, thus reducing the barrier of getting into the conversation. A watercooler, on the other side, works as a signal to informal discussions. Something like that doesn’t happen in remote work, so it’s management responsibility to facilitate those interactions.

How? First of all, create non-formal chat rooms. Second, organize periodic informal meetings and invite people to participate. However, keep in mind that simply bringing people together “for the sake of it” won’t work and you need to set the theme of such discussions.

A good example comes from a team of engineers that used Geekbot to send them a set of questions every Friday, such as:

What did you do this weekend?
Share something amazing that you read or saw!
Any upcoming plans?

These questions were sent individually to each employee, and everyone could see all the answers in the shared Slack channel.

Later the team would gather in Zoom and discuss their answers in an engaging real-time meeting.

The Future Of Work, Accelerated

Before the outbreak, remote work was a steadily growing trend. Due to the increasing number of magnificent applications, tools, and approaches, more and more people were willingly choosing remote work over the on-site alternative, which says a lot.

But now, for many, remote work is a necessity, a sudden and overwhelming change to their natural lifestyles. For many, an unwelcome one. And we’re not only talking about individuals, but the whole companies that now suddenly have to change their whole approach to leadership and adapt to the new reality.

Of course, all of this sounds very overwhelming, and, perhaps, frightening for some. But let’s focus on something positive: the field is now rapidly growing. Companies start to realize how productive their employees can be when working from home, and will open more remote positions, adding to the workforce diversity and inclusion.

At the same time, on-site workers will have a great opportunity to combine remote work with on-site work, without having to spend hours commuting and possibly relocating to less crowded cities, improving the economy of more rural areas.

Lastly, this is a huge boost for the digital industry in general. Virtual-reality conferences, interactive holograms, top-notch leadership methodologies will catch on and boost our flexibility and productivity, allowing more and more people living a more healthy and less corporate lifestyle.