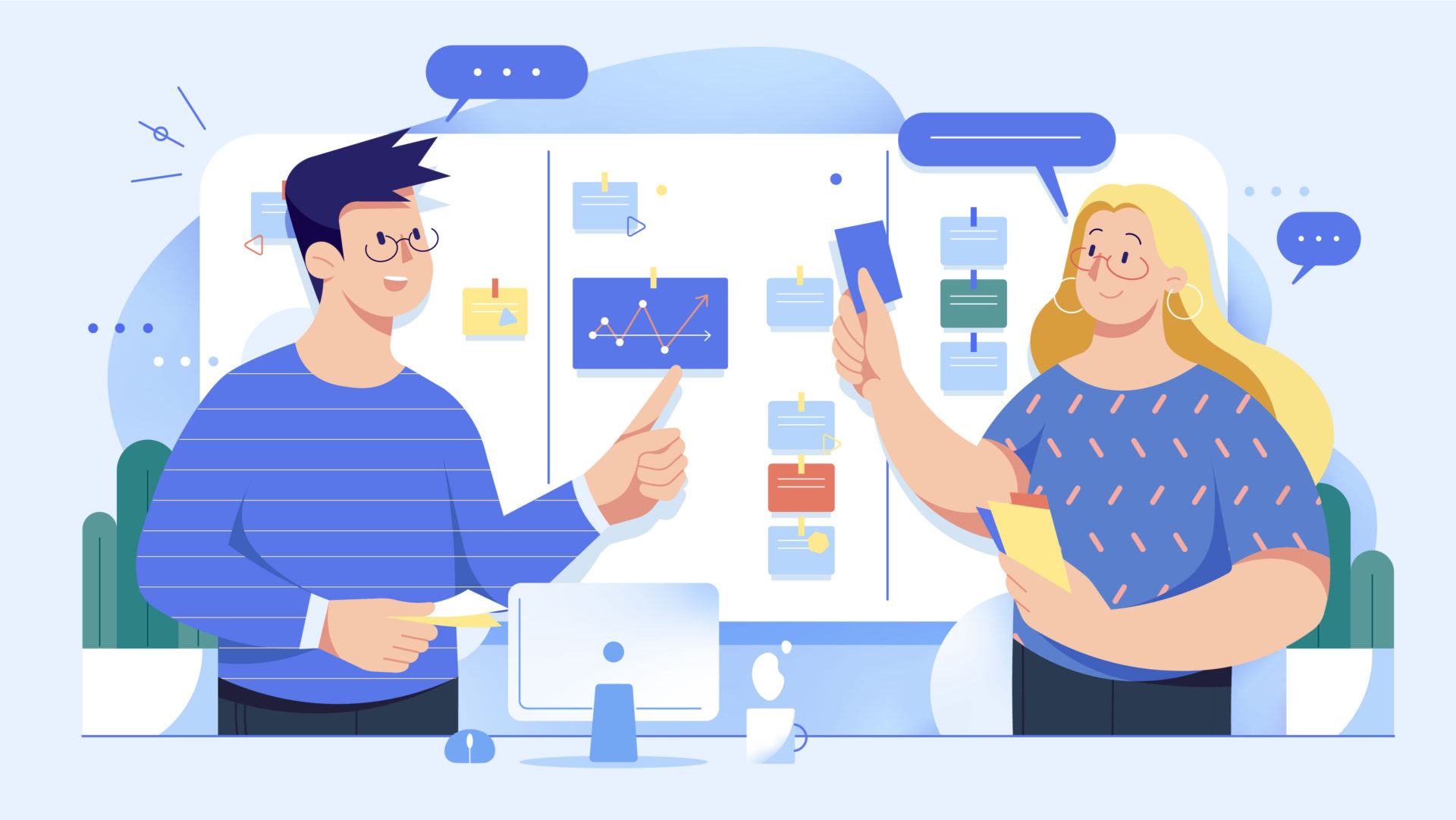 Since launching Geekbot in 2015, we’ve learned a lot about the most common anti-patterns that plague teams who run standup meetings. We’ve heard these from countless user research interviews we’ve conducted over the years.

There’s a sentiment around the agile community that in-person or synchronous standups can be a waste of time and unnecessary, and we totally get why some people feel this way:

We were frustrated with these issues with synchronous standups ourselves. So much so that we went ahead and built a tool that lets teams (including our own) run asynchronous, text-chat based standups in Slack (see logistics).

The asynchronous nature of in-Slack text standups solved a lot of the issues listed above, for us, along with many of our users. You can quickly type your standup answers and read other’s updates at any time throughout the day:

Now, we just type our own updates quickly, skim the standup answers, pay attention to any updates that are relevant to us, address as needed and move on with our day. And if we need to chat with someone privately, we can open up a Slack thread without disrupting everyone else:

Now you know where everyone is at and if anyone is stuck. There’s less communication overhead throughout the day. Typing and skimming answers is quick (less than 5 mins for most teams we’ve spoken to), and you don’t have to worry about workflow interruptions.

Many of the anti-patterns we’ll discuss in this post are avoided by default with asynchronous, textual standups. While our own team and many of our 100,000+ users are ecstatic that standups don’t take as long as they used to (among other benefits) we understand that some teams may prefer to run synchronous, in-person or video standup meetings.

Below, we’re going to list and detail the anti-patterns that have come up most frequently in our talks with users when discussing the challenges that synchronous standup meetings present.

While many standups end up turning into status meetings where teammates report to a manager, it defeats the self-organizing benefits of scrum.

One developer we’ve spoken to mentioned that their “real” standup starts secretly in the hallway after the original standup with the project manager is over, because they can finally discuss things freely and at ease without feeling pressured by the manager.

Teams can prevent this by communicating and making it clear that while the manager and Scrum Master (or anyone else) is welcome to sit in on the meeting to understand how the team is progressing towards the sprint goal, they should not actively participate. Once they start asking questions and micromanaging during the meeting, it quickly becomes a status report (instead of a quick way for developers to coordinate/get in sync, discuss updates that other teammates find useful, and minimize communication overhead for the day).

It can be extremely frustrating to watch a teammate ramble on with no end in sight, and describe everything in unnecessarily intricate detail.

Meanwhile, you might have a deadline coming up, and you’re thinking of all the tasks you could have finished. The rest of the team is stressed and frustrated. The momentum of the meeting is lost, folks check out mentally, and they anxiously stare at a clock, counting the seconds until the meeting is over.

If you’re running synchronous standups, a quick fix is to use a stopwatch or ticking timer and limit each standup participant to 60-90 seconds of speaking time.

While monologues are common during in-person or video standups, they’re avoided by default with our asynchronous, Slack-based standup tool, since developers are more likely to ramble in person vs. in writing, because writing requires more thought and extra effort.

You don’t have to sit through monologues with Geekbot, since you can quickly skim the team’s standup updates in Slack in under a minute and move on with your day if nothing applies to you:

3. Cross-Functional Team Standups — Updates Are Not Related to Other People’s Work

Standup meetings can be a nightmare for cross functional teams. For example, in a 6 person standup, a backend developer may have to sit through an update from a UI designer and a marketing person (even though their worlds rarely intersect).

These cross-functional team standups are more common than some people may think. Broken standups can go on for months on end unless the team communicates and finds a better solution (i.e. smaller standups that only involve agile team members whose work closely intersects).

As we mentioned earlier, with Geekbot, you can quickly skim updates and closely read only what is relevant to you (in contrast to synchronous standups, where you don’t have a choice about sitting through non-relevant updates day after day).

4. “Nothing to Report” Can Be a Good Thing

Most folks feel pressured into answering each of the standup questions, even if they don’t have any meaningful or relevant information to share with the team.

After all, if each team member goes around answering the 3 standup questions, and you have nothing to say when your turn comes, then it may seem like you haven’t been productive lately.

However, if several team members reply with “Nothing to report — same as yesterday’s tasks”, then it could be an indicator that your team is actually communicating effectively outside of the standup meeting. In that case, more people should be encouraged to answer with “Nothing to Report” (instead of sharing meaningless updates that waste everyone else’s time).

5. Standups Are Too Large

Naturally, as the number of standup meeting participants increases, so does the likelihood that teammates will have to sit through irrelevant updates, rambling, and so on (it only takes 1 person to derail a standup). It’s also harder to coordinate a meeting time that’s convenient for everyone.

There’s a good reason why the Scrum Guide recommends that no more than 9 people attend a standup meeting.

In theory, a highly disciplined Scrum team can run an effective standup meeting with over 9 people, but that’s the exception and not the rule.

Oftentimes, standup participants spend too much time sharing the details of what they did yesterday (to impress managers). For example, someone may go into too much detail on the story of how they solved a bug, even though that doesn’t impact what needs to be done today.

A facilitator or team leader should catch this when it’s happening, and alert the whole team that, “We’re spending too much time discussing things we did yesterday — let’s shift gears and focus more on our plans moving forward to complete the sprint goal”

Just when you think you can get to the end of a standup without it derailing, someone brings up the latest bug, and it sparks a discussion which extends the meeting by a few minutes (those extra few minutes here and there really add up over time, especially if you run standups on a daily basis).

To make things worse, oftentimes the topic of discussion has nothing to do with your own work.

This issue is avoided by default with Geekbot, since instead of solving/discussing a problem during the standup, 2 teammates can open up a private, threaded Slack discussion about something specific that only involves them (without disrupting coworkers).

It can get really frustrating when you’re sharing an update with the team, and someone interrupts you with a comment or asks a question, throwing you off your train of thought. Then, you might become frustrated and disengaged for the remainder of the standup.

Many teams use a stick/baton or ball that gets passed around and signals who needs to be talking at the moment. Not only does it limit interruptions, but it also makes the standup more fun.

9. Feeling Locked Into Running Standups Daily (Instead of Infrequently)

Some teams run standup meetings every single day just because it’s the accepted norm/standard. However, it may not necessarily work well for all teams.

For example, if your team’s strong suit is communication, then it may make sense to only hold a standup once or twice a week instead of daily.

However, a team that doesn’t communicate well (i.e. developers who never ask for help even when it’s needed) could have a lot to gain from running daily standup meetings to ensure nobody is stuck, and everyone is working on tasks that contribute to the sprint goal.

10. Getting Bored with the Same Routine

One of the issues with standup meetings is that answering the same 3 questions day after day can become dry/stale. As a result, team members become less engaged over time (even if the standups are run effectively).

In order to keep a standup lively, you can introduce an ice-breaker question at the beginning of each standup. For example, at Geekbot, many users add a fourth question: “How do you feel?”

The “How do you feel?” Question Serves a Few Purposes:

11. Sitting Down or Standing Up?

It’s common knowledge that standing up during the daily scrum can make people get to the point faster and minimize side discussions, since folks get tired when they’re up on their feet for too long.

However, there’s also an argument to be made that a more relaxed environment where team members are sitting down can foster a sense of comfort, which leads to more openness and engagement. In fact, The Druckman Company published an interesting article titled “The Sit-Down Stand-Up”, which outlines the benefits of sitting down during standups in a more “friendly and social” environment that makes it feel more like a “quick chat” instead of a routine chore.

Which are the scrum anti patterns?

Typical scrum anti-patterns include: turning stand-ups into status meetings, monologues from team members that take too much time to answer, extra-long stand-ups, team members interrupting each other, boring disengaging stand-ups, overly focused on the past stand-ups, and stand-ups with too many unnecessary participants invited.

What are the three questions that should be answered by each team member at the Daily Scrum meeting?

Three questions to ask during your daily scrum meeting: What did you do yesterday. What are you going to do today? Are there any roadblocks to performing your tasks? Additionally, a fourth short question can be added at the beginning of a daily scrum as an ice breaker to keep meetings fun and engaging.

The most common and the most harmful is having no retrospective altogether; its variations are short retrospectives and superficial retrospectives. Another common anti-pattern is non-actionable retrospectives that produce no list of actions that the team needs to perform to improve performance during the next sprint. Lastly, low-trust retros are a big problem: participants not sharing honest feedback or blaming each other.